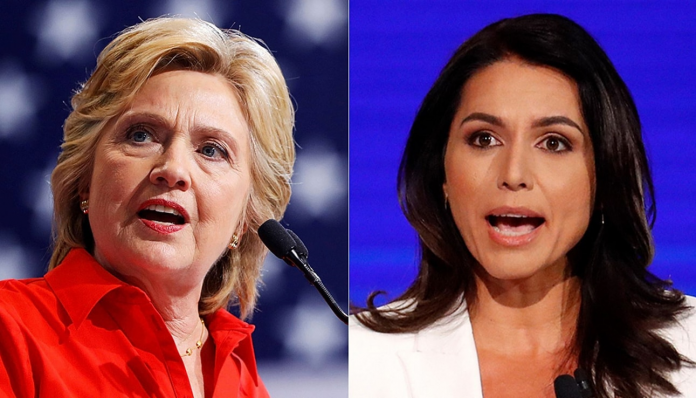 Former Secretary of State, Senator, and Presidential candidate Hillary Clinton has been trending in the news of late. She went from being a minor blip in the daily news cycle to spiking on October 18 – the same day her and Hawaii Congresswoman and Presidential candidate Tulsi Gabbard had a heated exchange after journalists interpreted something Clinton said  as accusing Gabbard of being a “Russian asset”. That interpretation has since been debunked as Clinton was actually saying that Gabbard was actually a favorite of Republicans right now and they were the ones likely grooming her for an independent run.

That correction took a full week to be issued by multiple major news outlets.

“An earlier version of this article described incorrectly an element of Hillary Clinton’s recent comments about Representative Tulsi Gabbard. While Mrs. Clinton said that a Democratic presidential candidate was ‘the favorite of the Russians,’ and an aide later confirmed the reference was to Ms. Gabbard, Mrs. Clinton’s remark about the ‘grooming’ of a third-party candidate in the 2020 race was in response to a question about the Republicans’ strategy, not about Russian intervention.”

It makes you wonder if Gabbard would have made the statements about Clinton that she did had the accurate interpretation of Clinton’s words would have been reported.

Since then Gabbard has fought back hard against Clinton, before news outlets ran their correction, and those allegations which haven’t been corroborated or proven to this point. Afterwards, the Clinton hype train began to pick up steam and so did Gabbard’s. In a span of one week Gabbard has stepped up her efforts to focus solely on her presidential campaign by announcing she wasn’t seeking re-election to Congress. In that same period of time Clinton is now being mentioned in the news as having not completely ruled out a 2020 run for president.

As you can see from the media mentions above over the previous 90 days both Gabbard and Clinton received a healthy spike in media coverage on October 18. Since then Clinton has steadily trended back down while Gabbard has continued to remain in the news cycle.

Is that one dust up with the Congresswoman from Hawaii all it takes to get someone like Clinton and Gabbard trending in the news – even if for just one moment? Not necessarily, which is why it’s important to look at which news outlets they are both actively being covered by and why.

Which news publications are the ones providing the most news coverage for Clinton in this short time period?

The top two are heavy right-wing media outlets and the third, Before it’s News, being a source for fake news and conspiracy-peddling.

It makes sense that conservative outlets, in any form, would want to provide media coverage to Clinton if there’s an opportunity to highlight conflict within the democratic party or cast her in a poor light. But, what about more favorable or neutral outlets?

MSNBC has spent so little time covering Clinton compared to other topics that she doesn’t even crack the top 10 most covered topics by the organization. Same thing goes for news orgs such as Huff Post and The Hill.

For Gabbard her major sources of news coverage come from the same top three sources as Clinton. However, she’s clearly more heavily covered by those outlets and other right-leaning outlets.

Gabbard being suggested as a potential “Russian Asset” provides the context around why RT has also covered her. But there are plenty of rumors suggesting Gabbard is going to run as a third-party candidate if she doesn’t secure the democratic nomination. Just as there are rumors suggesting she’s angling for an on-air job with Fox News once her campaign ends.

Given Gabbard’s more independent or moderate-right views on specific issues relative to the mainstream democratic party, it’s really no surprise some of these accusations or rumors persist. It’s also certainly not surprising that specific news outlets would take advantage of moments like these.

What is surprising is this one dust up between her and Clinton, even with Clinton being a prominent figure within the democratic party and American politics, sparked some steady coverage for Gabbard where she wasn’t receiving much at all before.

The main question here is did their exchange of accusations and insults matter enough to provide sustainable momentum for continued media coverage? Or, rather, did specific media entities amplify that first spark and keep the story going, as well as others, because it’s something these few outlets were able to push out to a large enough number of people to sew uncertainty or a bit of drama into democratic politics?

If anything, it at least appears that the overall reach outlets like Fox News, Breitbart, and even online conspiracy sites have can play a dramatic role in shaping our perceptions and opinions. This is only amplified further by how well some are able to leverage social media to reach even more people in the country and push their stories.

With the Russian and Iranian governments making efforts to disrupt our elections and news feeds, along with a host of other foreign powers, there’s also something else American citizens must be mindful of.

Figuring out why our own news by our own domestic media outlets are covering issues and politicians that matter to the general public the way they are. When something begins trending in the news we’re consuming, no matter how short-lived, it’s important for people to be able to easily identify why it’s trending and what that means to them.