Jean Carroll is a former renowned advice columnist for Elle who alleges then private citizen Donald Trump raped her in the mid-’90s. The statute of limitations has since passed so the president can’t have criminal charges brought against him for the alleged rape, but Carroll is suing him for defamation. The President denied having ever met Carroll and subsequently claims he did not sexually assault her while questioning her motives and character.

In her fight with Trump, Carroll has since been fired from Elle and been subjected to countless threats against her online.

Before this week, Carroll received previous news coverage from digital publishers in August when a judge ruled that her defamation suit against Trump could continue. Fast-forward to this week and the Department of Justice is stepping in to potentially represent the president and have the case end up as Carroll vs The United States, as opposed to Carroll vs Donald Trump.

More than 30 digital news publishers have covered this story since August. Here’s a visualization of the headlines written by those publishers and journalists. 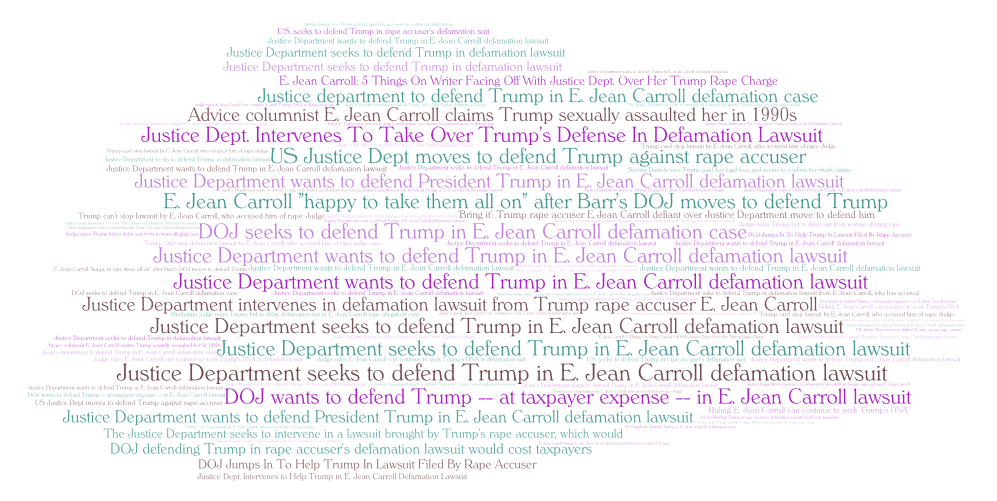 As you can tell just from the headlines the overwhelming focus on the story and case itself is the bombshell that the Department of Justice is attempting to take over the case. Let’s highlight the publishers and headlines that deviate from the typical “Trump can’t stop lawsuit..” focus in August and the “DOJ defending Trump..” approach now in September.

The overall content of this story isn’t much different than what was published by every other digital publisher reviewed. However, it does offer up the perspective and response from Carroll and her legal team which helps bring another element to a fairly straight forward story at the time.

Jean Carroll: 5 Things On Writer Facing Off With Justice Dept. Over Her Trump Rape Charges

This publication chose to do a human interest story on Carroll in an effort to educate the public and readers on who this person actually is. Carroll’s backstory, personal and professional life are highlighted as are the allegations she has brought against the President when he was a private citizen.

Newsweek published two stories detailing the lawsuit against Trump. One is focused on Carroll’s ‘take on the world’ mentality upon learning the DOJ is trying to intervene to defend the President. The Independent also took a similar approach.

The other story published has a headline that tells you everything you need to know right from the jump – which is if the DOJ successfully defends Trump it will be taxpayers footing the bill. Of the 30+ publishers reviewed in our data, they are the only one to focus on the impact this will have on taxpayers with the DOJ now trying to get involved.

If you would like to explore the publishers and journalists covering this ongoing lawsuit and related stories, you can find the data here.

Are you interested in discovering more about what digital news publishers and journalists are covering and how they are covering it? Konsume makes it easy to uncover key news media insights and perform meaningful data analysis. Register for a free account and try the tool for yourself and download the data. Follow us on Twitter @KonsumeHQ.