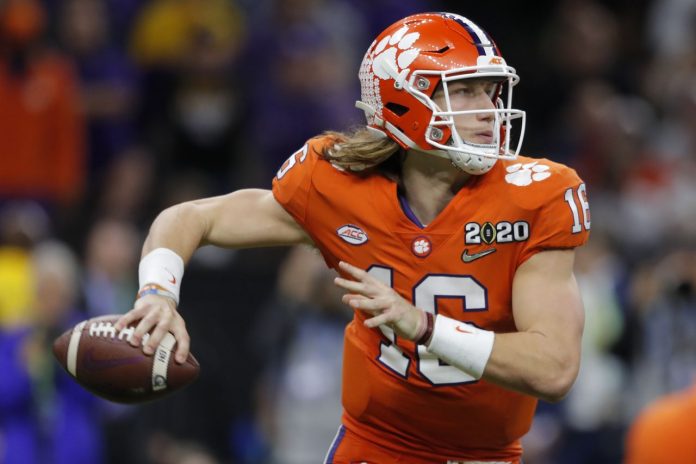 The New York Jets are an absolute dumpster fire of a football organization with a legitimate shot at picking first in the 2021 NFL Draft. They have started the 2020 season 0-6, have scored the fewest points in all of football with just 75 (an average of 12.5 PPG), and have allowed the third-most points (185) at this point in the season.

Add to the fact the Jets are one of the least disciplined teams in the NFL, according to the newly created ‘Discipline Index’ stat, and you can easily understand how there is just no salvaging this season.

The one hope Jets fans are clinging to is their team can secure the number one pick in the draft and select Trevor Lawrence, widely regarded as one of the most talented quarterback prospects since Andrew Luck. Some talent evaluators have even said they think Lawrence could potentially be even better.

While Lawrence hasn’t made any statements or provided any insight into how he would feel about being drafted by the Jets, other players and members of the media have. The collective thought seems to be that Lawrence should do all he can to not go to the Jets if they select him first overall in the draft (assuming they ‘earn’ the first overall pick).

So, how exactly could Lawrence ensure that he doesn’t end up another quarterback casualty of the Jets if they are in a position to select him?

Former Atlanta Falcons star wide receiver, and four-time Pro Bowler, Roddy White has gone on the record insisting that Lawrence go back to Clemson for his senior season if the Jets wind up with the first pick in the draft.

“Because it would be awful for you to get drafted by the Jets because they do not know how to put anything together over there as far as quarterbacking, weapons around the quarterback, as far as anything that has to do with offensive talent,” White told The Big Lead on Tuesday.

“If I’m Trevor Lawrence, I am weighing out my options if the New York Jets have the number one pick,” he told Marcellus Wiley and Emmanuel Acho on ‘Speak for Yourself.

Lawrence opting to go back for his senior season is the easiest way to avoid being selected by the Jets but comes with the risk of injury. If he were to take that path and got hurt that could potentially impact where he would be drafted in the 2022 NFL Draft which would also impact his initial career earnings. Miami Dolphins Quarterback Tua Tagovailoa had to endure that whole narrative and uncertainty leading up to his selection in this most recent draft.

Keep in mind, however, if Lawrence were to go back for his senior season there’s no guarantee the Jets don’t wind up with the first overall selection in the following draft.

The other option involves Lawrence refusing to sign his rookie contract. While the current Collective Bargaining Agreement makes rookie contract negotiations fairly straight forward, there is no mandate forcing players to sign those contracts. The drafting team also would not hold the rights to that player beyond a single season.

Theoretically, Lawrence could tell the Jets he would refuse to sign and hold out for the entire year and would re-enter the draft in the following season. The Jets would then have to decide if they would draft him anyway and attempt to convince him to sign his contract, or they would select him and then trade him to another team or just trade away the first overall pick before making a selection.

Eli Manning is probably the most relevant and recent example of a prospect clearly stating they do not want to be drafted by a specific team and actually getting his way. Manning, through his agent Tom Condon, told the San Diego Chargers, who held the number one pick in the 2004 draft, not to draft him because he would not sign and would instead sit out the entire season.

The Chargers ended up selecting Manning first overall and traded him to the New York Giants. The Giants traded away Philip Rivers, who they selected fourth overall, their 2004 third-round pick, and their 2005 first- and fifth-round selections to effectively move up three spots in that draft. It all seemed to work out for both franchises seeing as how the trade helped the Chargers turn into a winning organization and the Giants won multiple Super Bowls with Manning.