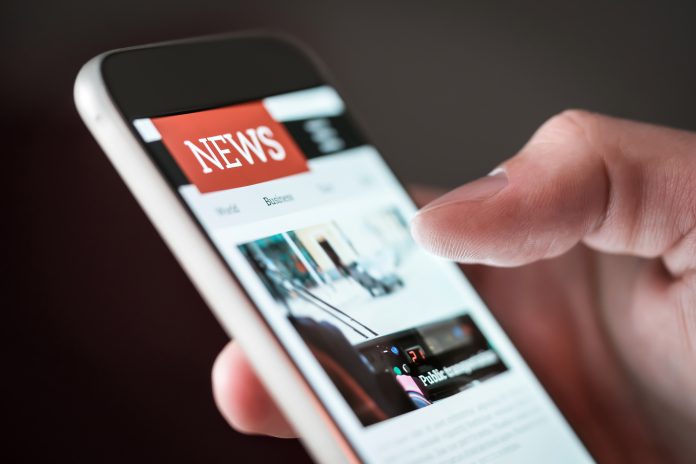 President Trump dominated the August news cycle in politics, which should come as no surprise. However, it included coverage of the Democratic nominee for President Joe Biden and his pick for Vice President Kamala Harris. Plus, Kanye West also remained in the headlines for his faux presidential run announcement/very public mental health crisis. 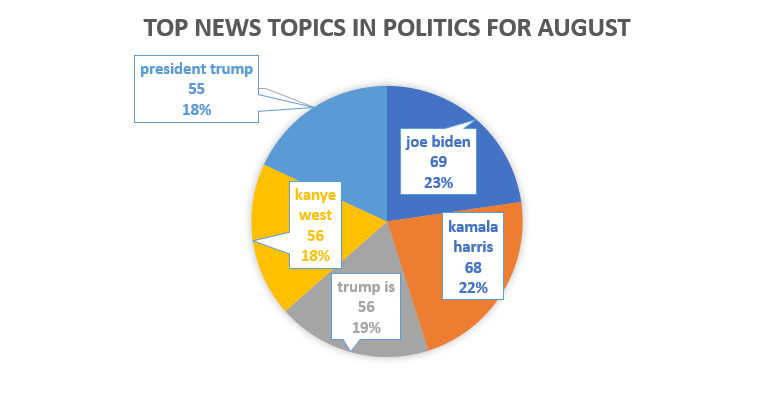 Aside from Trump, it should come as no surprise that Biden and Harris are the two most heavily covered politicians in our data. We are in an election year – one that feels as if it is the single most crucial election for a president in a generation or two. Then again, it could also just ‘feel’ that way because a large part of the electorate now is made up of millions and millions of younger voters who are just now eligible to vote, or they cast their first ballots in 2008 or 2016.

Stories about the President make up nearly 40% of news coverage among our top ‘five’ topics. Biden and Harris combine to take a 45% share of coverage, and the two will likely gain news coverage hand-in-hand going forward.

This chart represents digital news publishers that covered Trump for both terms in our initial pie chart. As you can see, Politico does not rely on an abundance of volume to reach its readers. Instead, it focuses on the quality and depth of reporting in their coverage, represented by the average social reach of each published article and the average word count of those stories. While the number of words in a news story does not necessarily correlate to a story that’s of higher quality, because flow and tone matter, you at least get a sense of how digital pubs and journalists on staff approach covering Trump and feature stories in general.

The major news story Politico published on the President had more to do with Trump giving former New York City Mayor Rudy Giuliani a prime speaking slot at the RNC and Giuliani’s undying loyalty to the President than anything else.

Here is a look at the other headlines by news outlets covering Trump for August:

Donald Trump is no Harry Truman, but a comeback is on the cards – The Guardian

Joe Biden has been a ‘darling’ of Breitbart news coverage for some time, but especially so once it was expected he would be the Democratic nominee for President. Their coverage leans heavy to the right, and Breitbart staff’s news stories focus on casting Biden in a negative light.

Coverage from the other news publishers, aside from the Daily Caller, has been keenly focused on Biden’s VP search leading up to selecting Kamala Harris, and his speech at the Democratic convention.

Here are some of those headlines:

Harris has attracted a lot of news coverage from right-leaning digital news outlets for some time now. She was the target of Russian hoaxers who pretended to be Greta Thunberg’s father. A story the DailyMail covered in great detail, along with publishing the transcript of the call itself. That accounts for the inflated average word count seen from them.

Many headlines from other leading publishers covering Harris centered around her not being a good VP pick for Biden. Others focused on the assumption she would be rejected by younger voters and an assortment of other attacks on her record as a former prosecutor, senator, and character. For certain left-leaning outlets such as The Hill, the concern is Harris is not ‘liberal enough’ for voters.

Here are the headlines for Harris:

Kamala Harris is pranked by Russian hoaxers – The Daily Mail

Are you interested in discovering more about what digital news publishers and journalists are covering and how they are covering it? Konsume makes it easy to uncover key news media insights and perform meaningful data analysis. Register for a free account and try the tool for yourself and download the data. Follow us on Twitter @KonsumeHQ.