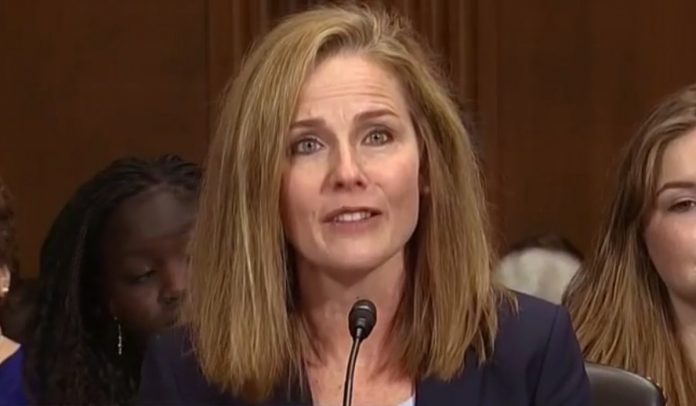 The mix of online news publishers covering Amy Coney Barrett and her nomination for the Supreme Court vacancy left behind by the death of Supreme Court Justice Ruth Bader Ginsberg is quite telling. More than 300 stories have been published about Barrett since September 18 and 22% of that coverage has been produced by the 12 online publishers highlighted in the chart above. However, the bulk of this coverage comes from news outlets or publishers with very conservative leanings or bias in their reporting. Either through the stories they choose to publish or how they choose to ‘present’ the news to readers.

Just in this top 12 list half are right-leaning (designated with red), one is a religious publication (green), and one traffics mostly in misleading or false claims with a hard pro-life, anti-abortion slant (yellow). The remaining three (white) are neutral or local publications.

The way Barrett’s nomination is being covered by online news outlets right now really boils down to a pro-life versus pro-choice stance. Journalists, or perhaps it’s a direction chosen by the publisher in some cases, are casting Barrett as a devout catholic and proven conservative who will help overturn Roe -v- Wade. But, the key difference In those narratives is whether these stories published add in the ‘flavor’ of casting Barrett as either a villain to liberals and women’s rights or a hero of conservatives and family values.

Filling this SCOTUS vacancy would always be about pro-life or pro-choice, regardless of which party was doing the nominating. The type of demonization we see by those in the news media before Barrett’s nomination has even been taken up in the Senate is done as a way to serve specific types of newsreaders. In many ways, it just feels like another attempt at pandering to a divided nation and creating an ‘us versus them’ mentality even more than is already currently taking place due to the political and societal climate.