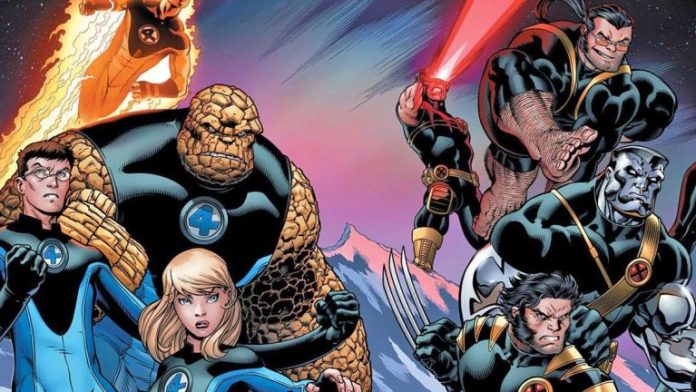 John Krasinski had a much-publicized meeting with Marvel about “future projects”, whatever they may be. Since The Office, A Quiet Place and Tom Clancy’s Jack Ryan actor tested for Captain America and has long been rumored a fan favorite choice to play Reed Richards (Mr. Fantastic) in a Marvel version of Fantastic Four with his real-life wife Emily Blunt as Sue Richards (The Invisible Woman), this started major buzz as to what’s coming. The talk with Marvel makes clear that he is eventually entering the Marvel Cinematic Universe in some capacity.

Apart from the occasional Easter Eggs, winks and strategic leaks designed to imply but not specify, Marvel has been relatively silent about its plans for Fantastic Four and X-Men. The deal in which Disney – which owns Marvel – acquired 20th Century Fox (dropping “Fox” from the name) gave it those long-awaited characters to do with them what fans have been waiting for: incorporate them into the MCU.

It’s too early to say if Krasinski will play Mr. Fantastic. It’s an obvious choice making it possible that Marvel will go left when everyone expects it to go right by possibly using him in another way. Still, that the studio is allowing the tension to slowly build with a similar patience it showed as it took the 12-year road from Iron Man to the collection of Marvel characters coming together in Avengers: Endgame and setting the stage for its Phase 4 largely comprised of secondary characters. The next blockbuster characters and stories for Phase 5 rely heavily on Fantastic Four and X-Men.

Both present challenges for Marvel to effectively bring them onboard.

Because the prior film versions of the Fantastic Four were either barely mediocre or outright terrible, there is less of a past to overcome than X-Men. There will be obvious expectations for Marvel’s Fantastic Four, but it would be preposterous to think that there are not already treatments and storyboards under lock and key as to the plans for it.

Marvel’s origin stories as they were updated for use in the MCU were glossed over more than fans realize. Apart from Captain America, the “how they got here” was added to the films as they moved along. Generally, the characters’ origins were not told chronologically.

For example, Spider-Man was already Spider-Man when Tony Stark dropped in with his proposition in Captain America: Civil War. Eventually, there might be more information as to how Marvel addresses the radioactive spider bite or if it does it at all. It might be that the story as to how he became Spider-Man is so well-known that it’s not even necessary unless they feel compelled to tweak it as part of a larger plan.

This is not meant to pass as advice for Marvel. Still, there are fundamentals that the new iteration will need.

With the comic origin of Fantastic Four, the crew of a spaceship – Richards, Sue Storm, Johnny Storm and Benjamin Grimm – are hit with cosmic rays during a private space flight, one that was not government authorized. Upon returning, they had each developed their individual powers with Richards turning elastic; Sue the ability to become invisible; Johnny setting himself ablaze; and Grimm a powerful, craggy entity with strength rivaling that of the Hulk.

Other planets, solar systems and the outer reaches of space have been part of the MCU already, so having the group as a crew simply visiting outer space may be untenable. It might not even be necessary.

Given the prevalence of billionaires like Jeff Bezos, Elon Musk and Richard Branson among others working toward private space exploration, that could be a window into how the Fantastic Four became the Fantastic Four. Rather than having Richards as a scientific genius doing research, he could be a multi-billionaire who is trying a similar civilian space outreach, bolstered by the sudden availability of space exploration through the ongoing events in the MCU that resulted in Endgame. A reluctant hero without the rampant ego and self-interest of the late Tony Stark, Richards could fit into the MCU in that manner.

The Fantastic Four’s hook was that despite their constant bickering, it was a family-type of affection-related banter rather than actual animosity. When they were needed, they came together and worked as a cohesive unit.

Fortunately, for Marvel in general and particularly the writers and production staff is that there’s no need to worry about the past films. 2015’s preposterous Fantastic Four with Michael B. Jordan, Kate Mara and Miles Teller was so terrible that it’s blotted out like a traumatic experience. The two films with the pre-Captain America Chris Evans, Jessica Alba and Michael Chiklis were well-meaning and moderately entertaining, but by the time the new Fantastic Four films are announced, made and released, it will be two decades since those movies. This frees Marvel to do whatever it chooses with no attachment or explanation.

This is not true with X-Men.

It is a hallmark of how unnecessary X-Men: Dark Phoenix was that the most memorable part was the first film appearance of Dazzler. The story was formulaic at best. The highest-paid actors Jennifer Lawrence, Michael Fassbender and James McAvoy were going through the motions to complete their contractual requirements, seemingly happy to be done with the series. The postmortems included director Simon Kinberg saying it should have been a two-volume film. These are “Yeah, whatever,” excuses. The film was perfunctory, uninteresting, repetitive and tired. This indirectly benefits Marvel as it is the last image moviegoers have of the Fox version of X-Men.

Marvel, as it sets about remaking the X-Men does not need to be overly concerned about any characters other than Wolverine, Magneto and Professor X. The films are secondary to the portrayals and Marvel’s imprint on them. Obviously, Hugh Jackman became such a cultural icon by so completely inhabiting the duality of ferocity and gentility of Wolverine. The act is not tough to follow. It’s impossible to follow making it pointless to try and follow it by doing anything other than making its own version of the character.

Deadpool may provide a minor template as to what direction Marvel may take with the mutants, but it’s a fine line to walk in being true to the characters while creating something that differs sufficiently to those films so fans can put them aside and not compare the past to the present.

Indirectly connecting the X-Men to Fantastic Four is Nazism and its impact on the characters. For Captain America: The First Avenger, it was a necessary link because the entire origin was not only based on Steve Rogers being too meek for military service but so patriotic and determined to help that he underwent a risky serum treatment to become a super-solider to fight the Nazis in World War II. Falling into the ocean and being frozen, only thawed out seven decades later, was a critical aspect of the narrative. That is not the case with Magneto – whose power manifested when he was in a concentration camp; or the Fantastic Four’s primary antagonist Doctor Doom – who sought power by aligning himself with Hitler

In The First Avenger, the Nazis were so ancillary that by film’s end they did not even exist and were replaced by HYDRA. HYDRA’s influence extended to a subversive infiltration into SHIELD and led to the downfall of nearly the entire Nick Fury-led apparatus.

When the characters were created, World War II was relatively recent having ended within the prior two decades. The Cold War was in full swing with the red scare of communism a daily concern. These were addressed in the comics. Today, these real-world sprinklings are ill-fitting. The floated idea of Denzel Washington as Magneto was met with creased brows and tilted heads. “But wasn’t Magneto a victim of the Nazis?”

Yes. He was. But that won’t work today. Another genocide or other unspeakable tragedy can easily be tailored to fit into Magneto discovering his mutant abilities whether that is Rwanda, 9/11 or Thanos’ snap.

The only character for whom that does not apply is the central character in the Fox series of films: Wolverine.

What Marvel could and probably should do is to bear in mind while not being a slave to Jackman’s superlative performance as the character. It cannot be the same, but it should not influence where they go in creating its own version. The easiest strategy and likely the most fan-friendly is to use the comic book introduction of Wolverine as a Canadian agent who battles the Hulk.

Returning to one of Wolverine’s origin stories as a feral beast trained, rehabilitated and weaponized in Canada could open the door to Marvel using the Canadian team Alpha Flight in some capacity.

Marvel’s use of current events was evident in the comics’ dichotomy of Professor X and Magneto’s fundamental disagreement in how to address mutant issues. Cultured and well-educated, Professor X sought peace and understanding with a liberal sensibility. Magneto, subjected to an unspeakable hell in his formative years knew what catering to the power of the state could breed, wanted to use his power to protect the “homo-superior” as he called them with a right-winger’s conservative tilt of acting rather than reacting, believing the other side has the worst possible intentions.

The battle against the “other”; authoritarianism; fear; assimilation vs. protectionism – all are fertile real-life storylines for the pending films.

While these are simply ideas and concepts, the foundation is that Marvel will finally get to put its mark on two missing pieces of the MCU at a time when there is a gaping hole in its fabric. Obviously, it would not have created a sense of finality with the Avengers’ original lineup, nor would it have been so vulnerable to a lull without its main marketable heroes had it not been confident it would get access to the Fantastic Four or the X-Men.

As with any creative endeavor, the story is key. Marvel has built sufficient capital to overcome the prior X-Men films, most of which ranged from good to excellent. The prior Fantastic Four films are irrelevant. Both give Marvel the room it needs to meet and surpass fan demands and expectations to fill the Hulk-sized hole left by the satisfying conclusion of Phase 3 and the groundwork of using predominately background characters in Phase 4.