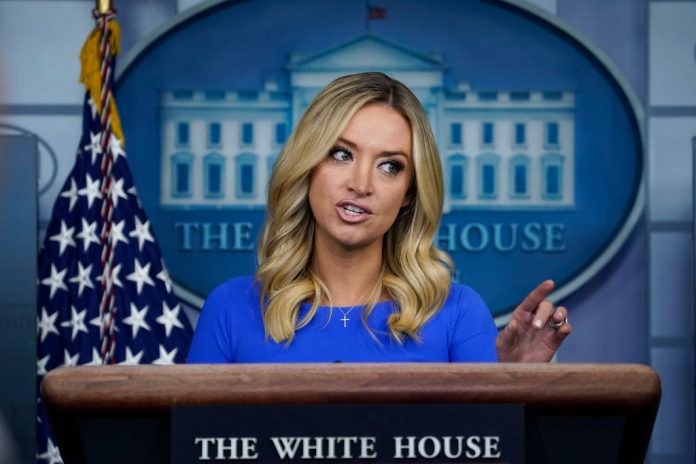 White House Press Secretary Kayleigh McEnany finds herself at the center of news stories practically every day. This month alone, there have been nearly 200 stories published online from over 130 digital news publications. The latest coverage on McEnany and the controversy she finds herself in has nothing to do with whether she is or isn’t wearing a mask while speaking with reporters or hanging out at Rose Garden events.

This time she’s in the news because Twitter suspended her personal account after violating platform rules regarding sharing hacked material.

“We don’t permit the use of our services to directly distribute content obtained through hacking that contains private information, may put people in physical harm or danger, or contains trade secrets.”

The story she shared was one published by the New York Post, which claims Democratic Presidential candidate Joe Biden’s son, Hunter, had been paid by the Ukrainian energy company Burisma Holdings in an alleged effort to obtain access to Biden for political reasons.

Biden has repeatedly denied the claims made in the published story, and already reports have surfaced that the material and information used for the story written and published by the New York Post was based on hacked, stolen, and even fabricated information.

McEnany spoke with Fox News’ Sean Hannity after being locked out of her account. However, it appears to have been restored since then and claimed Twitter “essentially had me at gunpoint and said unless you delete a news story published by the New York Post I cannot regain access to my account.”

“This is censorship, it is not the American way. This is not how a freedom-loving democracy operates,” McEnany continued.

“And we have to hold Twitter accountable. And Facebook, too, is banning the transmission of this story simply because ideologically, it hurts the side of the aisle the Silicon Valley prefers. It’s sad, it’s censorship, this is not America.”

Of the digital publications covering McEnany the most, here’s a look at the headlines related to this specific story.

Kaleigh McEnany’s Twitter is locked until she deletes Biden, she says – dailymail.co.uk

Here we can see that one publication has taken the approach of stating that McEnany’s Twitter account was locked because she was spreading “fake news.” Another describes Twitter as being “Power Mad.” Those two have clearly taken a side in how they are presenting their stories related to the topic and aren’t shy in doing so. Breitbart’s headline sticks to the facts of the story but also leaves out important context because of the questionable methods used to obtain the alleged emails and the legitimacy of the timeline of information presented in the New York Post story.

The other two headlines are fairly straight forward and don’t appear to have a bias either way, regardless of how the stories themselves are written and presented once you click through.

Given the frequency in which news stories are published online, shared on social media platforms, and then commented on and ‘presented’ to the public at large and even by news consumers (yes, to news organizations, you are a consumer), it can be challenging to decipher who’s telling the truth or simply where the truth lies within a story itself.

If you’d like to review the stories being published about this particular topic and McEnany herself, you can do so here. The data is open and free to download.