The 1619 Project is an ongoing project started in 2019 by The New York Times Magazine with the goal to “reframe the country’s history by placing the consequences of slavery and the contributions of black Americans at the very center of [the Unites States’] national narrative.”

There’s been much criticism and debate among well-known and highly respected historians. They have expressed “strong reservations” about the project and the fact that the recommended factual corrections have not been taken into strong consideration or implemented. Some historians and political commentators have accused the publisher and the journalists and researchers who worked on the project of putting ideology before historical understanding.

Given that there’s been a backlash to the project, especially by prominent conservative voices on cable television, elected officials, and academia, we decided to look at online news stories covering the project over the previous 90-day period. With over 80 stories published in this timeframe, one of the immediate things that stood out were three discernible spikes in coverage. The first occurred on July 23rd, the second on July 27th, and the last on September 6th. 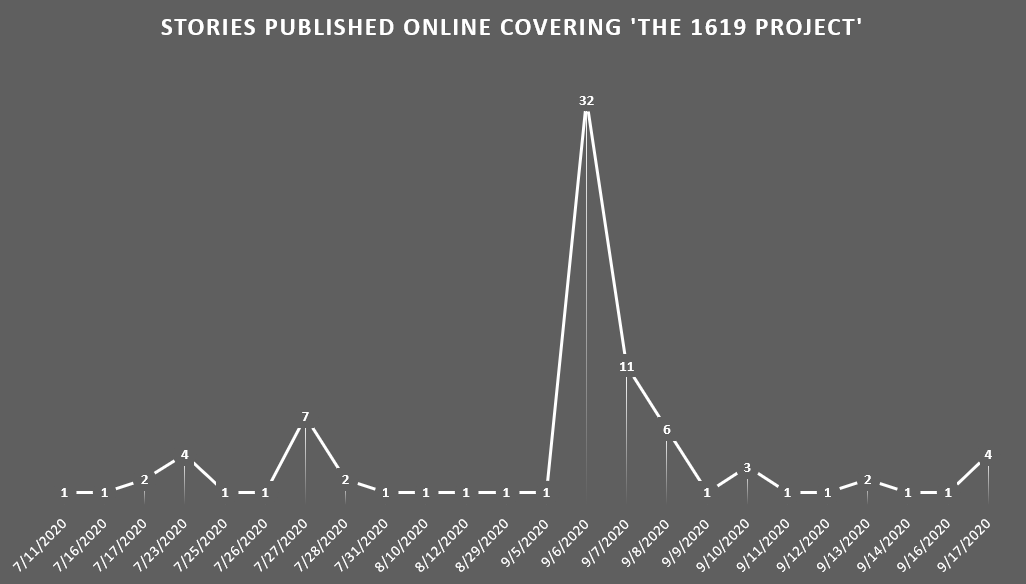 The first spike on July 23rd came as a result of Senator Tom Cotton introducing a bill to prohibit federal funds from being sent to any school district using ‘1619 Project’ curriculum. On July 27th, the second spike was a direct result of comments he made about slavery being a “necessary evil,” per the Founding Fathers of America. Here is the full statement he made to the Arkansas Democrat-Gazette.

“We have to study the history of slavery and its role and impact on the development of our country because otherwise we can’t understand our country. As the founding fathers said, it was the necessary evil upon which the union was built, but the union was built in a way, as Lincoln said, to put slavery on the course to its ultimate extinction.”

Cotton distanced himself from those comments on Twitter and in interviews immediately following the backlash but still held firm he was expressing the views of the Founding Fathers.

More lies from the debunked 1619 Project.

Describing the *views of the Founders* and how they put the evil institution on a path to extinction, a point frequently made by Lincoln, is not endorsing or justifying slavery.

No surprise that the 1619 Project can’t get facts right. https://t.co/nLsb73X3Gi

Nikole Hannah-Jones, the creator of the landmark 1619 Project, responded to Cotton on Twitter with this.

You said, quote: “As the Founding Fathers said, it was the necessary evil upon which the union was built.” That “as” denotes agreement. Further, if by path to extinction you mean growing the enslaved poP from 500k to 4 million at Civil War, a war fought over slavery, then, ok. https://t.co/22c94wWhni

Cotton’s effort to defund school districts where ‘1619 Project’ curriculum is being taught, coupled with his comments and assuming the views of the Founding Fathers, helped propel this story into national headlines for several days. Things began to quiet down, at least in the news cycle, until September 6th, when President Trump announced the Department of Education would be ‘looking at’ 1619 Project implementation in schools nationwide and openly threatened to defund schools teaching it. Trump singled out California specifically and dismissed the project as merely ‘revisionist history.’

Department of Education is looking at this. If so, they will not be funded! https://t.co/dHsw6Y6Y3M

Fast-forward to September 17th, and we are likely on the upswing of witnessing another spike in online coverage of this issue again now that the President has announced executive action on creating a commission to promote “patriotic education” as well as a grant to develop “pro-American curriculum” in schools. Critics have already slammed the decision saying it sounds eerily familiar to state-run education the likes of North Korea and Nazi Germany. 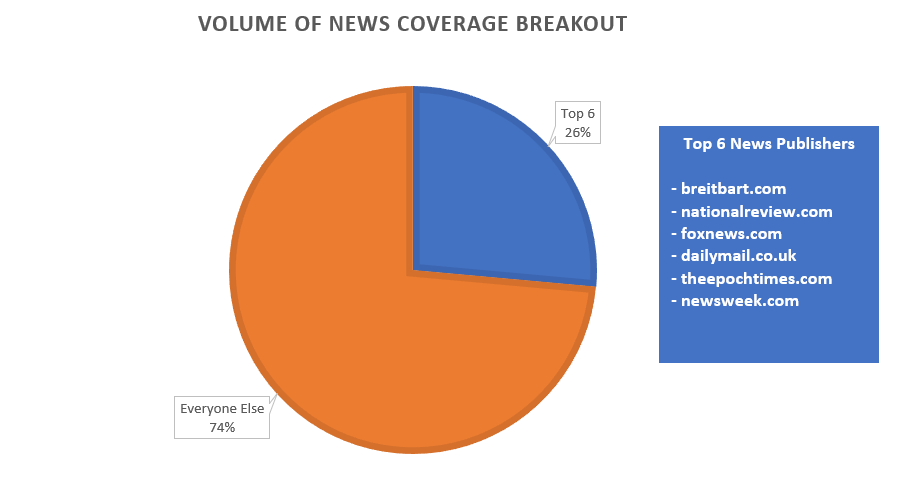 While highlighting how online news publishers cover a divisive topic such as this, it’s also important to point out just how significant a small number of news publishers can influence public perception or sentiment one way or the other.

This helps highlight how a handful of news publishers can dominate the news coverage on a particular topic to skew reporting or perception on a specific issue or set of issues.

Check out the news coverage for The 1619 Project here. You can also search for related topics using our search tool.