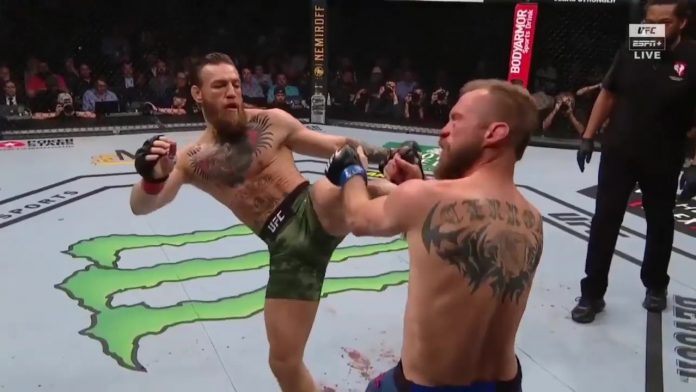 Conor McGregor made his return to the octagon at UFC 246 last night. Fighting future Hall of Famer Donald “Cowboy” Cerrone, expectations were all over the place. No one knew quite what to expect.

Was McGregor on a steep decline at this point in his career? Could Cerrone withstand the aggression of a first round with McGregor?

McGregor looked to be in peak physical and mental condition and he came out sharp. In just forty seconds Cerrone was dismantled by a flawless performance by McGregor. A performance which seemed to transport you back in time between 2013-2016 when McGregor was the most dominant fighter in the sport.

When the first left came sailing in from McGregor, Cerrone was ready for it and ducked under it immediately and went for a takedown. However, McGregor is a much better grappler than he’s ever been given credit for and snuffed out the takedown attempt with ease.

The two stood up in the clinch and suddenly McGregor did something that Cerrone himself said he had never seen before, and wasn’t expecting.

McGregor seemed to improvise greatly in the clinch and rammed his shoulder up into Cerrone’s face. Not only did it catch Cerrone by suprise it also completely destroyed his nose – blood pouring out as McGregor repeatedly rammed his shoulder into Cerrone’s face. At this point it was pretty clear that Cerrone was going to have to come up with something quick in an effort to buy himself a little time and simply survive at this point.

Then, in typical Cerrone fashion, he launched a head kick. And if you weren’t aware, ‘Cowboy’ owns the UFC record for the most head kick knockouts in company history. When you see that things tend to slow down a bit because your brain is trying to process the likely result of Cerrone connecting his vicious kick with an opponents head.

However, McGregor diffused the head kick attempt with ease. And suddenly – just like that. It was over.

McGregor somehow had the wherewithal to launch a head kick attempt of his own and, in someone poetic fashion, connected it squarely on Cerrone’s already bloody mess of a jaw.

Forty seconds is all it took for McGregor to come back into the octagon and make his presence felt. Putting other fighters on notice that he’s not only in great physical shape, that he’s not only improved on his own skills and fight game, but that he’s in the right head space to once again dominate the sport he so claims to love.