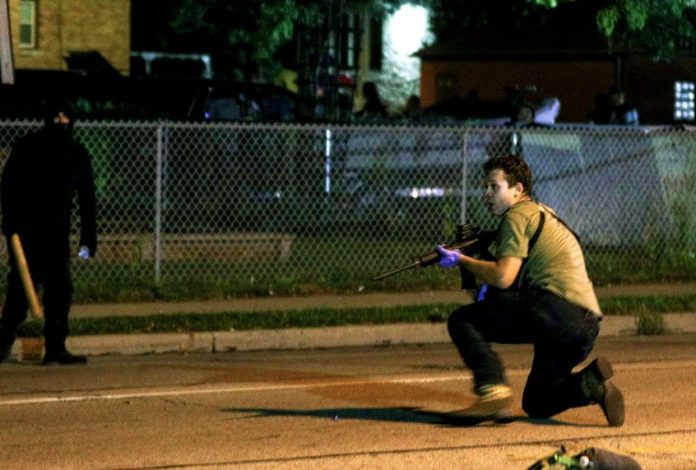 (Warning, Graphic/Violent)
A crowd chases a suspected shooter down in Kenosha. He trips and falls, then turns with the gun and fires several times. Shots can be heard fired elsewhere as well, corroborating reports of multiple shooters tonight #Kenosha #KenoshaRiots pic.twitter.com/qqsYWmngFW

Over 130 stories have been published by digital news publishers since video and eyewitness accounts of what took place were made public. While opinions and conjecture about Rittenhouse’s actions have largely been shared on social media and cable news networks (the term ‘vigilante’ is getting thrown around), online news publishers are also getting into the fray. Some are sticking to headlines and reporting based on the facts known at the time, while others are peppering in subtle (and not so subtle) bias in describing Rittenhouse, his victims, and the killings themselves.

Here are a Variety of Headlines from Online News Publishers:

What we know so far about Kyle Rittenhouse, accused vigilante in Wisconsin shooting
– cleveland.com

Readers can get a reasonably quick understanding of the angle these news publishers are taking as more details about the incident become known. Some are sticking to the facts and nothing else in their headlines and reporting. Others are taking a more sensational or inflammatory approach by supporting the notion Rittenhouse did the world a favor because one of the men he killed has a criminal history that includes being a convicted sex offender and had an open criminal case for battery, disorderly conduct, and other domestic abuse charges in Wisconsin.

The other victim, Anthony Huber, had been arrested multiple times on battery and drug charges.

Whether the men Rittenhouse killed were good, bad, or somewhere in the middle as human beings should not merit justification for the actions of someone who would not have known that at the moment. Yet, the beat of the drum provoking extreme reactions from supporters of the victims and the shooter continues in the way information is being packaged and presented to the general public on all platforms.

There are even independent, intentionally inflammatory blog sites heavily slanted to the right calling Rittenhouse an “American HERO.”

It’s more important than ever to be aware of the information we are being served by news outlets and those posing as one, or the very least pretending to be a credible source of information.

For example, the term “vigilante” is used to describe Rittenhouse in 17 (and counting) different headlines. There are a dozen (and counting) other stories with a headline citing “self-defense” before any trial has gotten underway. Those terms account for just over 20 percent of the news coverage online in just under a week.

With those two terms alone being used to describe Rittenhouse or express some absolute knowledge and awareness of his intentions, it lends credence to the thought that this 17-year-old was justified in his actions, that vigilantism by white males is acceptable under the right circumstances, and could ultimately embolden others who have fantasies of doing the same. Especially when you have images and videos showing white police officers being mostly indifferent to Rittenhouse wandering around with an assault rifle before and after the shootings. It seems lost on some that the officers shown on video and in pictures of ignoring him as he passed by had no reason to apprehend him in that moment because they were, reportedly, unaware of his actions.

When stories published about a situation such as this seek to make up others’ minds instead of simply providing factual information, it does a disservice to that community and anyone else trying to understand what’s actually happening versus the narratives being pushed based on specific political or ideological agendas.

According to more those with more liberal political views, Rittenhouse is portrayed as a ‘Blue Lives Matter’ fanatic and likely white nationalist who traveled across state lines to confront protestors with a gun he was not legally allowed to possess. Those on the more conservative and alt-right political spectrum have immediately justified what Rittenhouse did, saying it was self-defense, or how no one should be surprised a vigilante would rise to protect a city that is being run into the ground by Democrats.

What about the bias of online news publishers?

In somewhat disappointing fashion, just 13 percent of audited digital news coverage can be categorized as neutral or lacking in obvious bias. The percentage of news stories published that promote propaganda, conspiracy theories, or extreme ideological views nearly match that, accounting for 12 percent of coverage. Half of the news publishers covering the story have a Left or Left-of-Center bias in their reporting, and 25 percent have a Right or Right-of-Center bias.

The real issue here is the impact the intentionally misleading or extreme right-wing stories are having on the story’s overall narrative. Eschewing facts and verified information for false claims or ideologically driven narratives causes distrust among news consumers. Even more so as those sensationalized stories quickly make the rounds on social media platforms like Facebook and Twitter.

How information is packaged and presented to us has a far more significant impact on our perception of that news than we sometimes realize. Because, even with a small portion of news stories being intentionally misleading or inciting a strong, adverse reaction for all the wrong reasons, there is not enough fact-based neutral and fair coverage to combat it.