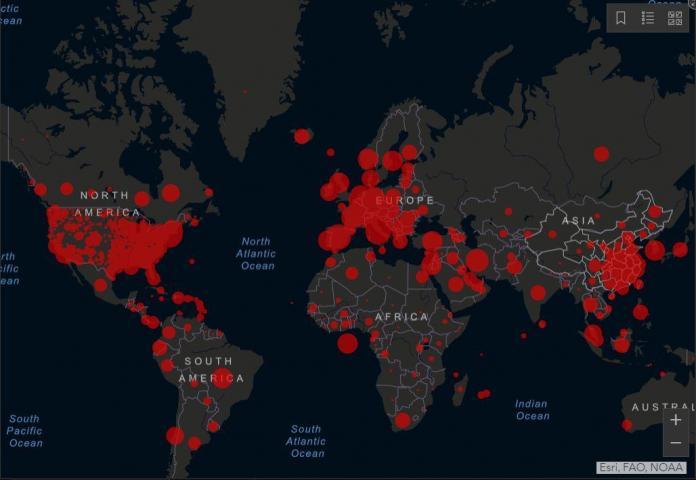 The Novel Coronavirus (COVID-19) is certainly no joking matter. Still, there are moments of levity to be had in the way people are reacting to what is about as close as society has come to a genuine zombie apocalypse so far.

With the popularity of zombie films and television shows that speculate on the societal breakdown amid the rise of the undead and vicious, virus-infected humans for whom any semblance of reason and rationality has been extinguished, comparing these characterizations may yield some interesting facts of fiction vs. reality.

Note: World War Z is not mentioned because it was little more than a capitalizing on the popularity of the genre and was a Brad Pitt vehicle that none other than Pitt himself thought was barely mediocre after it had substantial changes due to its previous terribleness.

The first few seasons of The Walking Dead were willfully dedicated to the zombies themselves and how the survivors navigated the new world while seeking to regain some sense of normalcy and basic rules of decorum. As time passed, the zombies receded into the background as scenery while humans retreated to their baser instincts and fought each other with personal beliefs and ethical, moral quandaries moving to the forefront.

As the Coronavirus spreads across the globe and the woefully unprepared authorities try to enforce curfews, lockdown orders and various mandates to try and prevent people from making it worse, this is the initial stage of “What’s happening here?” and “Wow, this is real, what do we do?”

The Walking Dead had a leadership void where some mostly well-meaning people took charge in certain instances with Shane Walsh and Rick Grimes generally – generally– thinking about others even if it was in the context of their own interests. Of course, self-interested dictators took charge in other areas framed under the guise of “evil” with The Governor and Negan. The Governor was simply sociopathic and brutal; Negan at least had some sense of order. Rick eventually degenerated closer to their level than they elevated to his.

The pandemic has not reached the point of a leadership void where elected officials are concerned about their own future any more than they usually are, and law enforcement has not abandoned its post in the flight stage of fight or flight.

There will inevitably be the rise of cult leaders and demagogues such as there are now in worldwide governments and hucksters trying to get money from desperate people in a more egregious way than they do during “normal” times.

The generally useless Fear the Walking Dead gave a strangely better version of how people ignore what is happening around them as they seek to maintain their mundane routines with basketball games ongoing as zombies with blood dripping down their chins are walking toward them. This dovetails with a significant amount of disbelief that it was really happening until the lights went out and the TV and internet no longer worked. Coronavirus has not gotten to that point…yet.

Night of the Living Dead is about as close to being the biological parent to The Walking Dead as anything in the genre, so its somewhat condensed version of a zombie apocalypse applies despite differences in how it happened.

Yes, the 28 Days Later/28 Weeks Later infected were more rabid human than zombie. That aside, the way in which the rage virus started, was passed on from one human to another, and how fast England devolved into chaos was a well-researched and inherently realistic narrative of how humans behave when the constraints of consequences are removed and the survival instinct takes hold. This is applicable for any fast-spreading virus that eliminates a person’s ability to reason and turns them into bloodthirsty entities for whom scratching and biting is their prime directive.

The virus started, predictably, with scientists infecting monkeys with the “rage” virus in the guise of research. Animal activists sought to free the monkeys and unwittingly unleashed the virus on the human population. This could be equated with the perceived start of Coronavirus in which someone allegedly decided it was a good idea to eat exotic animals – urban legend says it was a bat – in Wuhan.

With the rage virus, it happened so quickly and infected people indiscriminately with a 15-to-30-second incubation period that society took no time to gradually break down – it simply collapsed.

If the spread of Coronavirus occurred with such wanton rapidity, the downfall would likely mirror what happened with the rage virus. Every person for him or herself; endless destruction; other countries willing to help but focusing on their own interests and safety; and a blockade, especially if the country of origin was an island like Britain.

Whereas 28 Days Later first centered around fighting off the infected, then spun into a human vs. human fight for survival and ended on a hopeful note, 28 Weeks Later indulged in no such ambiguity.

Once the infection was supposedly eradicated and people were repatriating to Britain, the outlier of a person who was immune to the virus but could carry it led to the country being re-infected and a clear scenario of how military order and decision-making results in the need to serve the needs of the many over the needs of the few through extermination as a means of containment.

A decision on the part of the helicopter pilot at the film’s conclusion in taking a child who, like his mother, was immune to the virus but was a carrier is the exact type of selfless and stupid act of kindness that gets exponential people killed.

People who are getting on airplanes now knowing they have either been exposed to or outright have the Coronavirus just so they can “get home” is tantamount to slipping through the cracks of an overwhelmed security system and lack of checks and balances to prevent it from spreading.

That helicopter pilot wittingly violated protocol because there was no one left to answer to and unwittingly allowed the virus to reach France and mainland Europe, dooming the entire continent. That could easily happen with the Coronavirus when people are largely left to their own judgment and that judgment is rarely based on fact, but on emotion.

The Night Eats the World

A lesser known zombie film that was not overtly meant to capitalize on the popularity of zombie horror, but focuses on the aftermath rather than the evolution, The Night Eats the World is probably as close to viable in the zombie context as was 28 Days Later/28 Weeks Later.

How does a human survivor move forward knowing that civilization no longer exists? How long can one maintain sanity?

The Night Eats the World asks and answers the question of what happens after the catastrophe has already done most of the damage it could do and people have come to grips with the new world realizing they can no longer fantasize about a return to “before.”

The running zombies are attracted to sound. The protagonist basically accepts the turn of events and tries to create a sense of normalcy with music and staying occupied with rudimentary forms of time-killing entertainment. The basic needs of water and heat are solved relatively obviously with rainwater and building a fireplace. He becomes delusional like someone trapped in a desert without water and loses interest with an increasingly self-destructive “I don’t care anymore” attitude. Life becomes little more than a moment to moment enterprise with nothing to do other than live as an end unto itself.

People being forced to remain indoors during Coronavirus leaves them with little alternative but to interact in close quarters with their housemates whether that is blood relatives, spouses and children, or roommates. Even those who live alone must learn to accept a certain level of isolation. Contrary to the zombie apocalypse, there are outlets for human contact with the internet and telephones, so there will not be a person who is simply trapped in his or her own head. Eventually though, tensions will rise to the surface whether they were previously present or not.

Retreating to the primordial instinct for survival, the “new world problem” of awareness and memory sabotages an attempt to move forward for the more cerebral people. Survivalists or people who are accustomed to fending for themselves will have a better time of it, at least from the outset.

From The Simpsons‘ Treehouse of Horror III, there’s also a likelihood that people would use the opportunity to take lawlessness and an absence of consequences to carry out personal vendettas with slightly better nuance than Homer Simpson did below.

The key point is that in zombie movies, there seems to be a greater acceptance of the new daily life, sooner. With Corona, people are still clustering in groups, going to beaches, going to parks, waiting for their food order and disbelieving the repeated reports of the potential severity of the outbreak.

Part of that is the ineffectual response of those in power. People are advised to stay in their homes and go out only when they need medicine, groceries or other basics…and they can also go out to exercise. During a deadly pandemic, outdoor exercise is not a priority. This is a concession to “people are gonna do it anyway,” but many laws are in place to prevent “people from doing it anyway.”

The preposterousness of fist-fighting over toilet paper and hand sanitizer might make a viral video that is undeniably funny, but it is also a sign of what will be prioritized. Water, canned goods and first-aid supplies come before toilet paper.

These priorities and that people react better in fictionalized versions of a global meltdown is somewhat terrifying. With the current pandemic, the virus itself started out as the enemy that some took seriously and warned about while others cavalierly dismissed. There is still a long-range and selfish tilt to how supposed leaders and agenda-based political commentators and reporters are treating it with partisanship taking precedence over safety. Perhaps it takes the finality and unambiguous nature of a zombie apocalypse to change that. The sense, however, is that people would still be standing in line at Starbucks and be thrilled when the person in front of them is bitten by a zombie or a virus-infected human just so they don’t need to wait as long for their Caffè Americano.