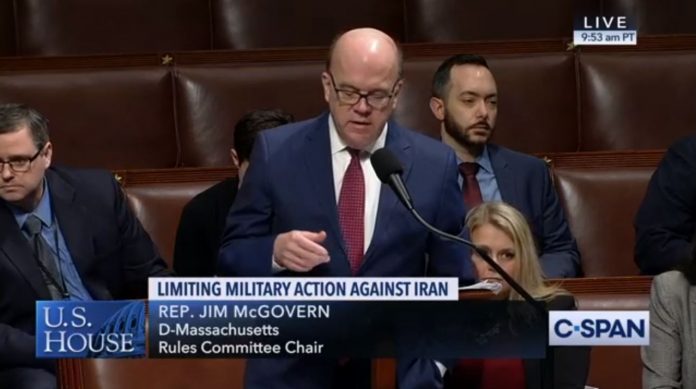 Speaker of the House Nancy Pelosi issued an official statement announcing the upcoming vote on a War Powers Resolution to limit the President’s military action regarding Iran.

Discussion and debate are currently taking place live, right now, and you can watch the live video feed to watch how it all unfolds.

Here is Speaker Pelosi’s statement regarding this resolution in full:

“Last week, the Trump Administration conducted a provocative and disproportionate military airstrike targeting high-level Iranian military officials.  The Administration took this action without consulting Congress.  This action endangered our servicemembers, diplomats and others by risking a serious escalation of tensions with Iran.  Since then, the President has made clear that he does not have a coherent strategy to keep the American people safe, achieve de-escalation with Iran and ensure stability in the region.

“Members of Congress have serious, urgent concerns about the Administration’s decision to engage in hostilities against Iran and about its lack of strategy moving forward.  Our concerns were not addressed by the President’s insufficient War Powers Act notification and by the Administration’s briefing today.

“Today, to honor our duty to keep the American people safe, the House will move forward with a War Powers Resolution to limit the President’s military actions regarding Iran.  This resolution, which will be led by Congresswoman Elissa Slotkin, will go to the Rules Committee this evening and will be brought to the Floor tomorrow.

“The House may also soon consider additional legislation on the Floor to keep America safe.  This legislation includes Congresswoman Barbara Lee’s resolution to repeal the 2002 Iraq Authorization for Use of Military Force (AUMF) and Congressman Ro Khanna’s legislation to prohibit funding for military action against Iran not authorized by Congress.

“The Administration must work with the Congress to advance an immediate, effective de-escalatory strategy that prevents further violence.  America and the world cannot afford war.”