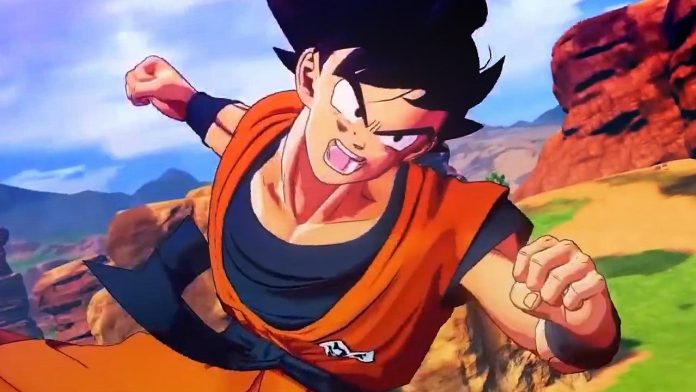 While being one of the most iconic anime of all time, Dragon Ball Z’s story has been told tons of times in video games. The series has had games being made since back in 1986 with little in the way of diverting from the groundwork laid by the manga and anime. Enter Dragon Ball Z: Kakarot, the latest telling of Goku and his friends set up with an open-world and RPG mechanics.

When compared to other anime video games, it’s a great time and a must-play for Dragon Ball Z fans. When taken in as a video game released in 2020, there is a noticeable amount of lacking features and performances of the game. 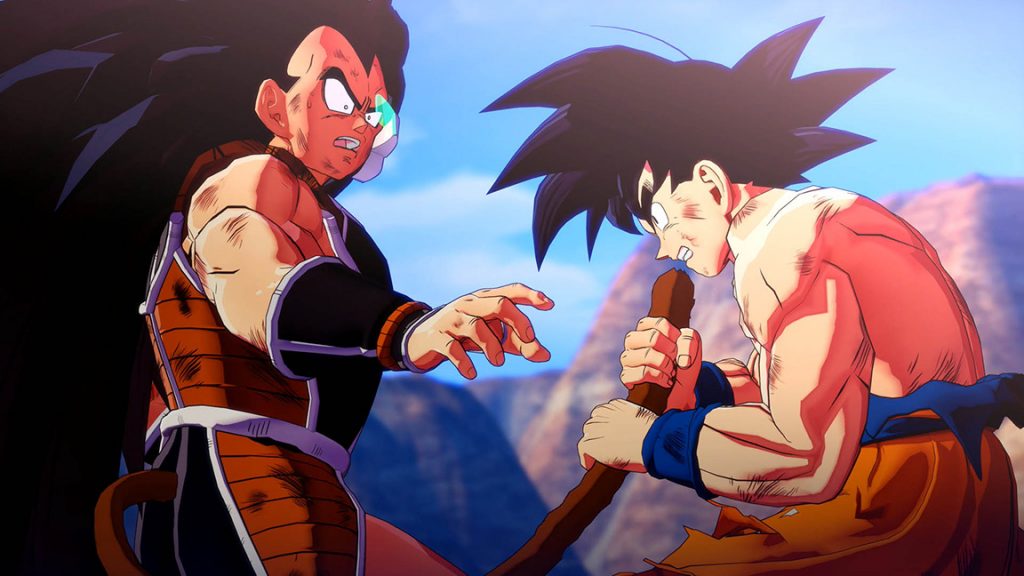 As stated above, Dragon Ball Z has no shortage of games covering it. Like most other games in the series, everything between Raditz arriving in the Saiyan Saga to the fight against Majin Buu is covered. While these are classic stories, it would be great to get a game going over events in the original Dragon Ball or the newer series Dragon Ball Super.

Dragon Ball seems to be a forgotten series, although there are plenty of references to it in Kakarot. Dragon Ball Super, on the other hand, is the reviving of the Dragon Ball series, and it is surprising not to see this game pursue that storyline at all.

That brings me to one of my biggest complaints about this game. For a game called Dragon Ball Z: Kakarot (Goku’s Saiyan name), you spend way too much time playing the other characters in the show. The character you probably play the most is Gohan. It’s not necessarily the developer’s fault on this. DBZ was trying to go away from Goku being the main character and only bringing him in for the big final battles most of the time. It’s still disappointing to me because Goku is my favorite character. While I appreciate seeing the character development the Vegeta and Piccolo, in a game named specifically after Goku, I would rather play solely as Goku.

Through the main story, which took me about 25-28 hours to complete (there are a LOT of cut scenes) I probably played as Goku about 4-5 hours. He is always either dead, on a spaceship, or recovering from a heart virus. You very well could go about five hours or so before you take control of the character the game is named after. There is no gameplay in the other world, no training sequence on his way to Namek, and they couldn’t even put in a dream sequence while he’s sleeping in the Android Saga.

On the storytelling side, Kakarot excels telling a story any DBZ fan has burned into their memory. A large majority of the original English cast returns to reprise their roles and all nail their performance. Some of the newer voices sound off, but they get the job done overall. Vegeta fans will be happy to know their prideful Saiyan is exactly how you remember him, Piccolo’s transition from King Piccolo to Gohan’s babysitter is also indicated like in the show, and Gohan goes from stuttering annoying little kid to stuttering, strong guy in a ridiculous hero suit. Yep, everything is here. 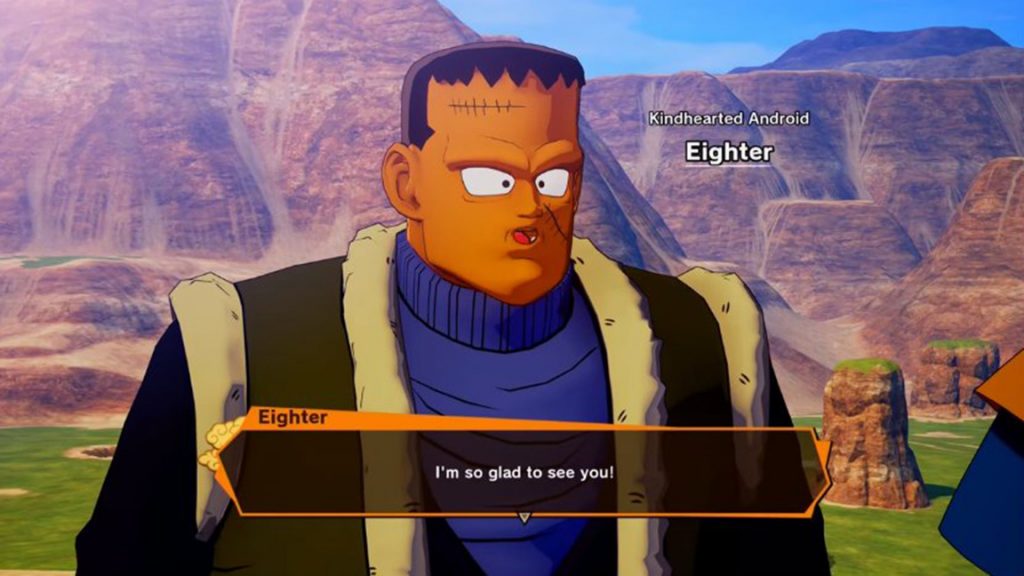 There are also some surprise returns for characters we haven’t seen in a long time. Launch was a regular character in the original Dragon Ball series who creator Akira Toriyama forgot about (there is also a great reference to that fact in the game). She and other characters that Goku encountered when he was a kid are a nice presence in the game. If only the side quests had more to them than usually being fetch quests, it would be more noticeable.

Every side quest has basic writing behind it. I wish they could have spent more time on the quests away from the main story for something new and exciting. As it is in the game, every encounter feels like a simple reference to the past and doesn’t build much on some great characters that have been long forgotten. 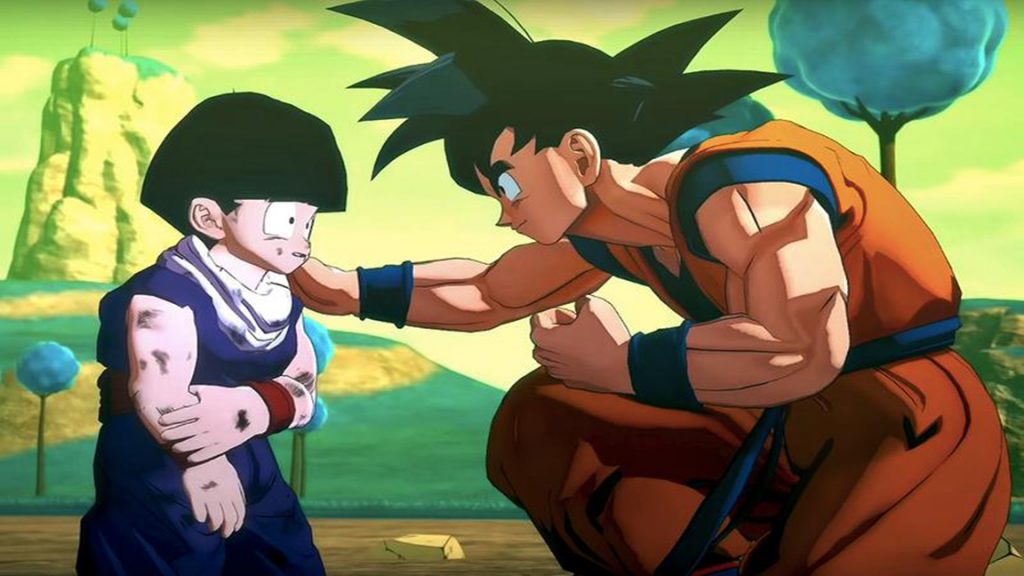 When announced, one of DBZ: Kakarot’s biggest selling points was for the open world. Most Dragon Ball games focus on the fighting aspects of the series and not much about the world around them. Kakarot aims to change that, but in many ways, it fails. At no point is the open world ever empty, there is always something to do, but that doesn’t mean any of it is worthwhile.

The world is covered in Z orbs that you collect to unlock each playable character’s skill tree, but this becomes pointless once you begin collecting the dragon balls and complete more fights in the story. Aside from orbs, you run around grabbing food, car making items, medals to learn other moves, and any fetch quest items the mission you are on requires. The open world is only used for these fetch quests and nothing creative or fulfilling. Even the fishing and hunting are pointless wastes of time until you need to get specific items for a quest.

Dragon Ball Z: Kakarot didn’t need to be an open world game. Seeing the locations from the show and flying everywhere is fun for the first hour or so. Also scattered throughout the world are enemies to fill it out more. These battles become more of a nuisance than anything where they will hunt you down and start a conflict while you are trying to pick up items.

These enemies hardly ever give enough experience or orbs to justify continually pursuing them. The random enemies also never really change as you progress through the story. You still fight Saibamen in the Buu saga, and any of the Frieza Force you run into is essentially the same enemy type with a different skin. I hate having to say this, but there are no redeeming qualities to the open world. 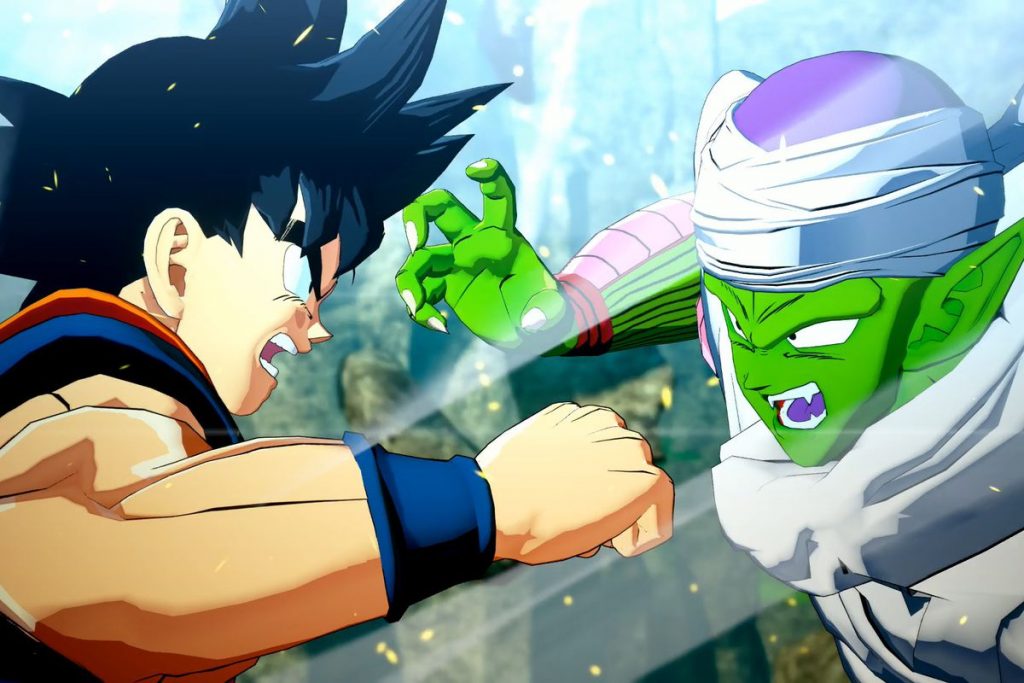 Where DBZ: Kakarot’s open world is disappointing, the fighting is up to par. If you have played either of the Dragon Ball Xenoverse games, it’s similar behind-the-back fighting. You have your dedicated melee, energy charging, blocking, and standard energy blast buttons. Holding down the left shoulder button lets you choose one of your special attacks, and the right shoulder button gives you the chance to command your support characters’ special attacks. Holding both trigger buttons brings your transformations up.

It’s a simple fighting control scheme that is easy to get into, but there isn’t much room for complicated moves. Most combo moves involve punching the opponent until you send them flying and then shooting a special move at them. Rinse and repeat (with some blocking thrown in) and every fight feels the same more or less.

In the open world, you fly or run around to each objective or item. The game also offers vehicles or the nimbus cloud to travel on, but much like Saints Row 4, you can fly faster, so what is the point of having vehicles? The nimbus cloud is slow-moving and the hovercar doesn’t provide much in the way of enjoyable gameplay.

One of the more interesting features of DBZ: Kakarot is the community system. As you progress through the story, you earn tokens with a character on them. Each character can be put in an area that will give you slight bonuses. Z Warriors focus on battling, cooking, of course, affects the meals you make, and the list goes on. Each community can be upgraded by giving your characters gifts that you get for doing pretty much anything in the game.

The community system doesn’t make a huge impact on the game, but I found myself strategizing where each character should go a lot. Some will provide better bonuses if put with other characters and the sets can be changed to your preferences. To some, it may be a waste of time, but for how basic the communities are, I enjoyed at least looking through them. 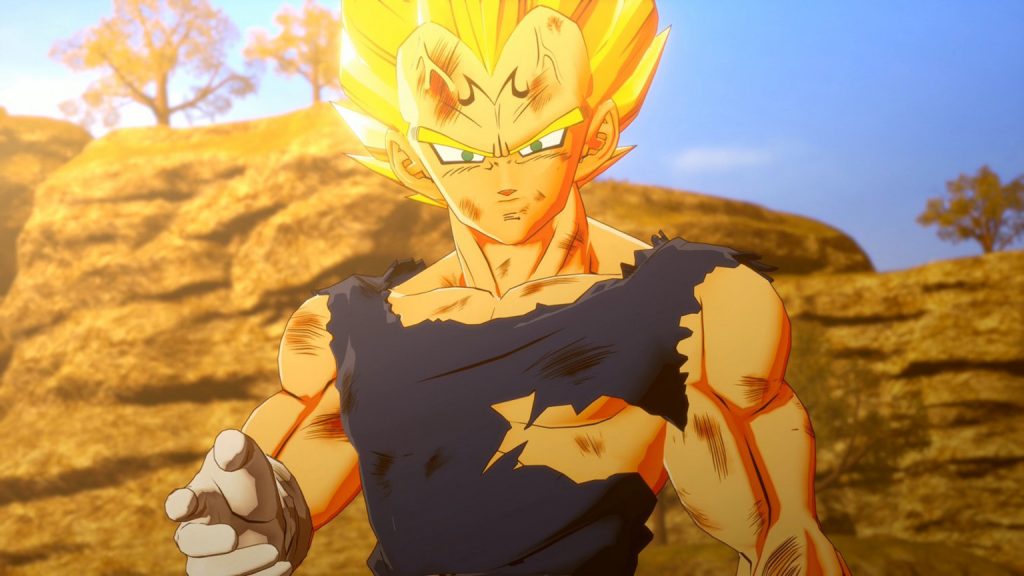 Dragon Ball Z: Kakarot’s best moments happen during the iconic fights of the series. Goku vs. Vegeta (both times), Goku vs. Frieza, Gohan vs. Cell, Majin Vegeta vs. Buu, and Goku vs. Kid Buu stand apart from every other fight in the game because of the beautiful cut scenes that lead into them. You can tell the development team put a lot of emphasis on nailing the emotions and high intensity of these specific moments.

Unfortunately, everywhere else in the game takes a big step back in the form of production. Even in the main story, most scenes are played out with stationary models or still images. It’s a very noticeable difference that immediately takes you.out of the experience.

I think DBZ: Kakarot could have greatly benefitted from a delay. At the very least, making sure every story-related section of the game has a cut scene instead of the still image would have been a good start. Performance-wise, I dealt with a lot of stuttering especially when a fight first began, but also during times where a lot of energy blasts were being fired in battle. Other than that, the performance was fine aside from tiny bugs. I had characters running in place, flying in place, and one moment where I found an extra character model of Goku in the world, but nothing game-breaking. Now and then, characters wouldn’t move their mouth when talking in cut scenes and the save icon wouldn’t leave my screen until I rebooted the game.

Like I said, nothing terrible, but a short delay to put more time in could have gone a long way to making this a better game overall. 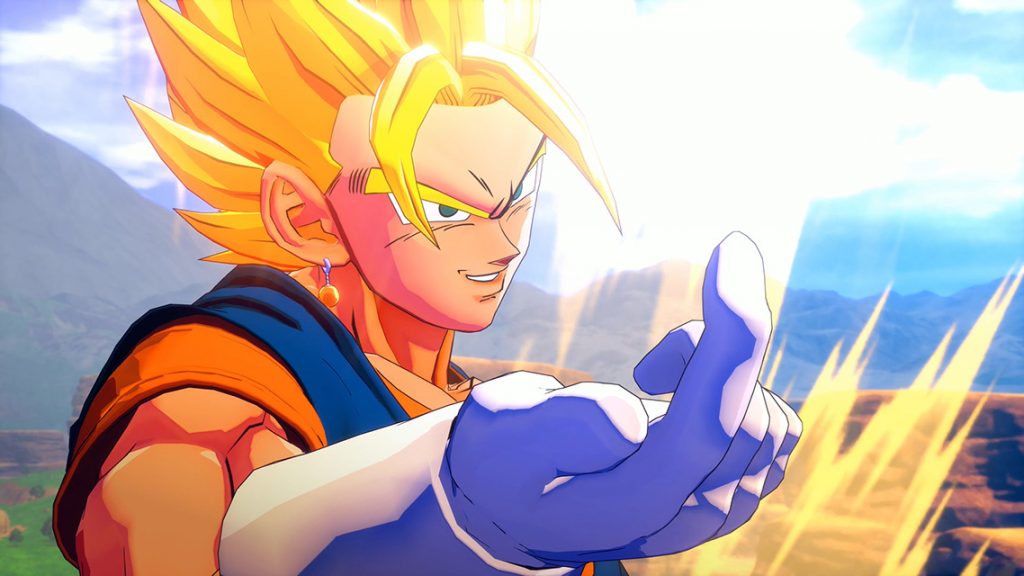 In conclusion, if you consider yourself a big Dragon Ball Z fan, you will enjoy DBZ: Kakarot. Everything you love about the show is covered, but not much has been added that is worthwhile. A disappointing open world with basic RPG mechanics does not make this a great selection for someone outside of the fandom. As an anime game, it’s good, if that says anything. Judged as a video game coming out in 2020, it is flawed and boring at times.

I am worried about how the game will age. Xenoverse tried to change things a little at least, and Fighterz delivered a good feeling fighting game. Dragon Ball Z: Kakarot is not a great open world RPG. There is nothing that makes this game stand out or makes it memorable. It may be completely forgotten about by this time next year.