What do you get if you search the term “child labor” on Konsume?

You’ll see news results highlighting the fact that U.S tech giants such as Tesla, Apple, Dell, Microsoft, and Google are being accused of aiding child labor and slavery in Congo.

The lawsuit is the first of its kind brought against the largest tech companies at the same time. The suit was filed by International Rights Advocates on behalf of 14 parents and children from the Democratic Republic of the Congo (DRC).

Just how are they aiding such horrific activity in a country that traffics in corruption, child and slave labor, and a crushing 73% poverty rate?

That is the resource these children are being forced to mine for these tech giants so consumers can continue to enjoy the latest and greatest in smart phone, smart car, and smart everything technology.

This suit is directly accusing the named companies of “knowingly benefiting from and aiding and abetting the cruel and brutal use of young children in Democratic Republic of Congo (DRC) to mine cobalt, a key component of every rechargeable lithium-ion battery used in the electronic devices these companies manufacture.”

Five children have already been killed working these mines and 11 others were injured. Images from the lawsuit show children who have lost limbs, have had limbs crushed, and become paralyzed from the chest down to highlight the dangers and horror these children and families face each day.

The children shown in the lawsuit are considered to be “lucky” because they managed to escape the mines with their lives.

It can be difficult to imagine and understand a world in which slavery still exists. But, that very thing is still rampant in underdeveloped parts of the world because only so much can be immediately done to force the corrupt, the abusers, and the perverted to end such practices.

Africa has the largest number of child laborers in the world, with an estimated 72 million African children being forced into labor of some kind. Nearly 32 million of those children are in a hazardous line of work, such as mining cobalt directly or indirectly for companies who may have direct or indirect ties to the accused tech giants.

Studies have shown that nearly 59% of all child laborers in Africa are between 5 and 11 years old. Another 26% are between 12 and 14, and then 15% are between 15 and 17. Child labor, and in some cases outright slavery, skews much younger their than anywhere else in the world.

Even though the DRC is one of the poorest and most politically unstable countries in the world, it produces over 55% of the world’s cobalt. This uncertain nature regarding the political climate, labor practices, and mine operations are leading reasons why cobalt is classified as a critical raw material by the EU.

It also helps explain why major tech companies and foreign governments are so eager to get as much from the DRC as they possibly can. There’s just no telling when the situation on the ground could get worse politically, when working conditions at the mines become unmanageable that operations and production halts as a result, or that increased pressure from human rights groups and the international community becomes so intense that regulation in some form is forced on companies that seemingly have direct or indirect ties to such operations. 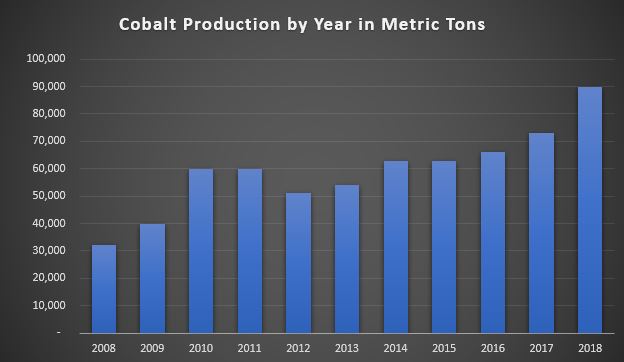 Given the fact global cobalt production has tripled in the past five years, as a result of global demand, and is looking to double by the end of 2020 – more injuries and deaths of children and other laborers will continue if it is not seriously addressed.

Media coverage in the United States, and from many other developed nations who rely on cobalt as a vital resource for tech, has been scant at best with just over a dozen unique news stories written about this humanitarian crisis. The vast majority of other mentions simply include the original AP article released. It’s a common tactic in news media that ‘if it bleeds it leads’, but perhaps that only applies to specific types of horrific news stories that can be glamorized and spun-up in a click-bait way.

Children being forced into hard labor, working mines for slave wages, and being cast aside when they die or become injured in a way that will negatively impact their lives forever isn’t sexy. It’s sad.

Who would want to call attention to something like that?